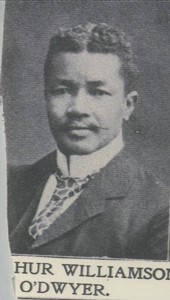 Arthur Williams O'Dwyer was a general merchant in Calabar who was originally from Sierra Leone. He was prominent in the city's commercial arena during the early twentieth century.

O'Dwyer was born on February 21, 1861. He attended Wesleyan High School in Freetown and then went to work briefly as a clerk for the Public Works Department in Freetown. He later resigned his duties and started business as a general trader of goods. In 1885, he went to Calabar and became a consular clerk for Edward Hewatt, the Consul General for the Bights of Benin and Biafra. In 1894, he became a clerk for the post office and was later sent abroad to gain further experience and knowledge. He returned in 1902 and was subsequently made the Paymaster and Quatermaster of the Southern Nigeria regiment. He was on the post for four years before retiring to private business.

He started his business as a commission agent and auctioneer and was relatively successful. He soon branched out into selling various fashionable wares.