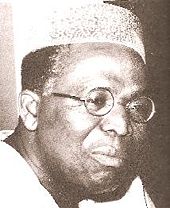 Obafemi Awolowo (1909-1987) was a Nigerian politician and leader, a Yoruba and native of Ikenne in Ogun State of Nigeria, who started as a regional political leader like most of his pre-independence contemporaries. He founded many organizations, including Egbe Omo Oduduwa, the Trade Unions Congress of Nigeria and the Action Group political party. He was an active journalist and trade unionist as a young man, editing The Nigerian Worker amongst other publications while also organizing the Nigerian Produce Traders Association and serving as secretary of the Nigerian Motor Transport Union. After earning a Bachelor of Commerce degree in Nigeria, he travelled to London to earn a law degree. He was the first indigenous Premier of the Western Region under Nigeria's parliamentary system, from 1952 to 1960, and was the official Leader of the Opposition in the federal parliament to the Balewa government from 1960 to 1963.

Chief Awolowo was a leader who believed that the state should channel Nigeria's resources into education and state-led infrastructure development. Controversially, and at considerable expense, he introduced free primary education for all in the Western Region, established television service, and expanded electrification projects in the region using proceeds from the highly lucrative coacoa export industry. His investments , amongst others,led the region to produce the most highly-educated populace in Nigeria at the time. Although popular in the Yoruba west of Nigeria, his left-leaning politics made him unpopular with the nation's largest political bloc - the northern, Muslim-conservative, and Hausa-dominated, Nigerian People's Congress (NPC).

Prior to independence, he was persuaded by prominent members of the Action Group to lead the party as Leader of the opposition at the Federal Parliament, leaving Samuel Ladoke Akintola as the Western Region Premier. Serious disagreement between the Awolowo and Akintola on how to run the western region led the latter to a "partnership" with the British backed, Tafawa Balewa led NPC federal government. A contrived constitutional crisis led to a pre-determined declaration of a state of emergency in the Western Region, after an election which many claimed Akintola and his new coalition had lost, but rigged the result of. Revolt began with the Agbekoya attacking all known Akintola sympathisers in what became known in Nigeria political lore as "wetie".

Excluded from National government, the position of Awolowo and his party became increasingly precarious. Some politicians, mostly of Akintola's group, angered at their exclusion from power, formed a break-away party, the Nigerian National Democratic Party (NNDP), under Chief Samuel Ladoke Akintola. With central government support, and following orchestrated disturbances, the elected Western Regional Assembly was suspended, only to be reconstituted with the pro-government NNDP in control. Shortly afterward, in 1964, Awolowo and several others were charged and jailed for treason. The remnants of the Action Group fought the National election of 1965 in alliance with the largely Igbo, and south-eastern NCNC. Amid widespread allegations of blatant fraud, the government parties of the NPC-NNDP won the election by a large margin. There were violent riots across the Western region as centres of AG strength discovered that they had supposedly elected NNDP candidates.

In the aftermath of the election there was a military coup on 15th January, 1966, establishing a National military government, following by a counter-coup on 29th July, 1966 six months later. Chief Awolowo was pardoned and freed from prison by the July 1966 coupists who were led by Lt. Col. Yakubu Gowon and Lt.Col. Murtala Mohammed. When the civil war broke out over the secession of the Eastern Region, Awolowo visited the Biafran headquarters and attempted to broker a peace agreement between Chukwuemeka Odumegwu Ojukwu and his Nigerian counterparts. When the negotiation failed, Chief Awolowo was invited to join the Nigerian government as the finance minister.

He went on to resign his position a year after the end of war in preparation for elective office.In 1979, Chief Awolowo founded the Unity Party of Nigeria as a successor to the Action Group, and contested the presidential election that year. He lost to Alhaji Shehu Shagari by about 400 000 votes. In 1983, he again contested the presidential election, this time losing to Shagari by over four million votes, in an election that Awolowo and most Nigerians regarded as fraudulent.

Chief Awolowo would be remembered positively for originating progressive, people-centered politics in Nigeria as well as building the first stadium in West Africa, first television station in Africa, and introduction of free primary education in the Western region of Nigeria.

Chief Awolowo was respected by his peers all over Nigeria and beyond [including Kwame Nkrumah], and many politicians continue to invoke his name, his policies, and the popular slogan of his Action Group party—"Life More Abundant"—during campaigns. He was also the author of several publications on the political structure and future prospects of Nigeria. These works include Path to Nigerian Freedom and Thoughts on the Nigerian Constitution.

The University of Ife, located in Ife, Nigeria, was re-christened Obafemi Awolowo University as a posthumous honour and a recognition of his role in founding and building this world-class institution. His portrait adorns Nigeria's one hundred naira currency note.