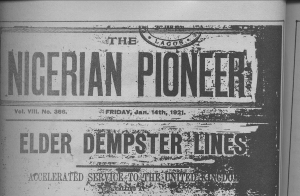 Kitoyi Ajasa' was a Nigerian lawyer who was an unofficial member of the Legislative Council and Nigerian Council from 1906-1933. He was also the publisher of the conservative Nigerian Pioneer. He is sometimes described as a contemporary of Henry Carr, who was an acquaintance of Ajasa. Both men were less involved in the African nationalism movement of the era. (1) However, unlike Carr, Ajasa seemed to be more critical about native African affairs and less critical of British colonialism. This led Thomas Jackson to label his role in journalism as one of flunkeyism. Ajasa was also friends with Lord Lugard, the first Nigerian Governor General.

Ajasa was born on August 10, 1866 in Lagos to Mr T.B. Macaulay, his original name was Edmund. He attended C.M.S. Grammar School and later left the country for further studies and better access to health facilities in the United Kingdom. He studied Law in England and was called to the Bar in 1893. He left London subsequently and started practicing in Lagos. In 1906, he was appointed as an unofficial member of the Legislative Council and was later made a member of Lord Lugard's Nigerian Council in 1914. Throughout his career, he was a member of various boards and committees across Nigeria. He was supposedly persuaded to start the Nigerian Pioneer by Sir Walter Egerton, the Governor of the colony and Lord Lugard. He started the paper in 1914 and was designed to balance the views of both the colonialists and the indigenous Africans.

He is the father of Oyinkan Abayomi. Along with his friends, Sapara Williams and Egerton Shyngle, the trio were the most distinguished Lagos lawyers from 1893-1902.