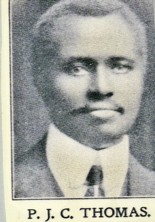 P.J.C. Thomas was a Nigerian businessman working along the coast of the country who owned one of the earliest major trading houses indigenous to Nigeria.

Thomas was the head of S. Thomas and company, a modern Nigerian tradng concern with about 50 employees during the 1910s. The employees were afforded a pension like saving system according to the amount of years spent in the company.

The firm's headquarters was located on Williams Street, Lagos, due to the location of the firm, the company enjoyed easy access to produce as it was strategically located close to stores engaged in its line of business. The company also had branches in Ibadan, Ilorin, Kano, Oshogbo, Zaria and factories in Iwo and Ede. A variety of produce such as corn, flour and skin and hides went throught the firms export trading post.

The firm is sometimes described as the pioneer in hides and skin exporting. It also owned a shop for making shoes.