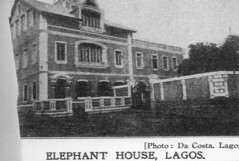 Samuel Herbert Pearse, F.R.C.I. was a pioneer Nigerian shipper and produce exporter of Sierra Leonean and Egba heritage. He established the first Hotel in Lagos in 1907. He was also a member and secretary of the Lagos branch of the Anti-Slavery and Aborigines Protection Society.

He was born on November 20, 1865 to the family of Reverend R. Pearse of the Church Missionary Society. He attended C.M.S. Grammar School, Lagos for secondary education and started work as an apprentice in 1883. In 1888, he teamed up with Sierra Leonean businessman, I. Thompson and the two began trading in Lagos and London. However, both men parted ways in 1894. Pearse soon started his own trading account in Calabar and Lagos and also became an agent for the African and Gold Coast Trading Company.[1] He made extensive wealth trading in Palm produce from the Old Calabar province as one of the pioneer Nigerian exporters of goods. He acquired a large steamship prior to World War 1, and succeeded in the lucrative shipping market dominated regionally by the Elder Dempster company. He later delved into the Rubber business in Benin and focused more on importing goods.[2]