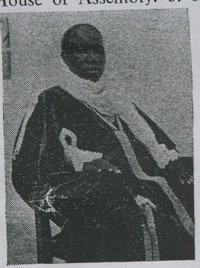 Umaru Gwandu was a Nigerian politician and great grandson of Abdullahi Dan Fodio. He was speaker of the Northern House of Assembly during the first republic having been the clerk to the Northern Assembly for much of the 1950s.

He was a president of the West African Library Association.