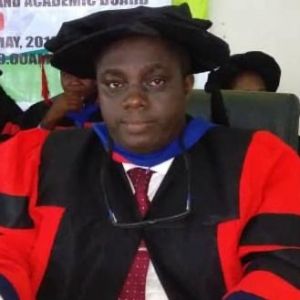 He is an HEI Administrator and professional Manager with several publications to his credit and over 30 years working experience in private and public sectors. He worked as an Administrative Assistant at Oyo State Council for Arts and Culture for his national service (NYSC) in 1990. He also worked at the Social Democratic Party National Secretariat at Ikoyi, Lagos and as a Treasurer at Treasury and Finance Company Ltd, Ikeja Lagos between 1991 and 1993. He worked at Word Communication Ministries, Onireke Ibadan; Evans Publishers Ltd, Jericho Ibadan; New Covenant Church, Ijokodo, Ibadan and Federal Ministry of Internal Affairs. He became an Administrative Officer at University of Ado-Ekiti in 2001 and rose to the post of Deputy Registrar in 2015. He served as a Commissioner in Ekiti State Universal Basic Education Board in 2007, a member of Governing Council and Visitation Panel to University of Ado-Ekiti (now Ekiti State University) from 2007 to 2009, the Alumni President of Ekiti State University between 2007 and 2010 and the Registrar of National Institute for Educational Planning and Administration, Ondo in 2017 to 2018. He is currently the Registrar and Secretary to Council of Federal Polytechnic, Ekowe, Bayelsa State, Nigeria.

He is married to an educator and law graduate with three children who are chartered accountant, lawyer and a Physiologist respectively.