In 1876, a 27-year-old missionary named Mary Slessor emigrated from Scotland to spend the rest of her life in Nigeria. For her efforts in trying to covert the people of Nigeria, Mary Slessor's photograph appears on Scotland's ten pound note, and her name can be found on schools, hospitals and roads in Nigeria.

The introduction to Mary Slessor's biography titled: 'White Queen of the Cannibals' is revealing:

'On the west coast of Africa is the country of Nigeria. The chief city is Calabar,' said Mother Slessor. 'It is a dark country because the light of the Gospel is not shining brightly there. Black people live there. Many of these are cannibals who eat other people.' 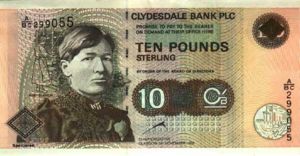 'They're bad people, aren't they, Mother?' asked little Susan. 'Yes, they are bad, because no one has told them about Jesus, the Saviour from sin, or showed them what is right and what is wrong.' These opening words clearly show that Mary Slessor came to Africa on a mission to indoctrinate us with Christian theology.

She told us we worshipped an inferior god and that we belonged to an inferior race. She worked to expel what she described as 'savagism' from our culture and heritage and to encourage European 'civilization' to take root in Africa. We accepted the mission schools which were established to enlighten us, without questioning the unforeseen costs of our so-called education. These mission schools plundered our children's self-esteem by teaching them that, as Africans they were inherently 'bad people.'

Mary Slessor's photos on the front and back of Scotland's ten pound note.

Our children grew up not wanting to be citizens of Africa. Instead, their education fostered the colonial ideal that they would be better off becoming citizens of the colonizing nations. I speak of the price Africans have paid for their education and 'enlightenment' from personal experience. I was born 'Chukwurah,' but my missionary schoolteachers insisted I drop my 'heathen' name. The prefix 'Chukwu' in my name is the Igbo word for 'God.' Yet, somehow, the missionaries insisted that 'Chukwurah' was a name befitting a godless pagan.

The Catholic Church renamed me 'Philip,' and Saint Philip became my patron and protector...more here- Emeagwali