Difference between revisions of "Bukola Saraki" 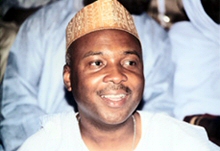 Dr. Bukola Saraki was born on 19th December 1962 into the family of Dr Abubakar Olusola Saraki, the Turaki of Ilorin. He attended Corona School, Victoria Island Lagos from 1966-1972 for his primary school education and King’s College, Lagos from 1973-1978 for his West African School Certificate. Dr. Bukola Saraki was at Cheltenham College, Cheltenham in London from 1979-1981 for his High School Certificate. He proceeded to the London Hospital Medical College, University of London in 1982 and was there till 1987 when he obtained his M.B.B.S (London). Dr. Saraki worked as a Medical Officer at Rush Green Hospital Essex, London from 1988-1989, Senior Casualty officer of Royal Free Hospital, London from 1988-1989 and Director, Societe Generale Bank (Nig) Ltd from 1990-2000. In recognition of his starling quality, particularly in the area of budgeting and financial management, the Federal Government appointed him as a special assistant to the President on Budget in the year 2000. He worked in collaboration with the ministry of Finance and representatives of the National Assembly in ensuring early preparation of the year 2000 and 2001 National Budget from policy formulation to specific implementation strategies and capital appropriation. He was actively involved in all negotiations with the World Bank and the International Monetary Fund (IMF) on behalf of our great country.

As special assistant on Budget, Dr. Saraki served on the Economic Policy coordination committee, the highest economic policy formulation policy in Nigeria that is responsible for the formulation and implementation of key economic measures for the Federal Government. He was also the Chairman presidential committee on non-oil Revenue Generation from year 2000-2001. Dr. Bukola Saraki made sure that he did not lose grip of the affairs of Societe Generale Bank (Nig) Ltd. Being the Executive Vice Chairman of the Bank from year 2001 to date, he was responsible for the development of the Bank’s overall strategy, corporate direction and business plan. He provided the requirement leadership for the articulation and implementation of investment policies that define the bank’s “risks and return preferences”.

Dr. Buloka Saraki has attended various courses both at home and abroad. These include “Advanced Credit Analysis” at London D.C. Gardner (1992); “Executive Management Programme” at London American Express (1993); private and public sector working together” at Washington (1997); “Values and Visions” at Malaysia (1998) as well as “Nigeria in the Global situation” at Lagos Business School in 1998. He is a member of the Nigeria Medical Council; British Medical Council; World Young Presidents Organization; Board of Trustees; John Kennedy Performing Arts Center, Washington and FITC Governing Council.

Dr. Bukola Saraki contested the gubernatorial election of April 19, 2003 in the State under the platform of the People’s Democratic Party (PDP) and won overwhelmingly. He was sworn in as the 18th Chief Executive of Kwara State on 29th May, 2003. He is married and blessed with four children. His interests include Tennis, Squash and Reading. --Lekan 02:22, 17 August 2010 (MDT)