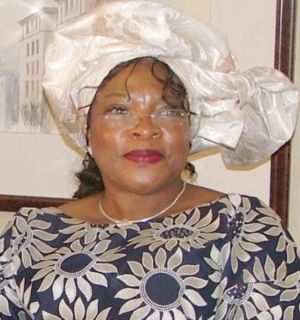 Chief Temitope Ajayi, is the Founder and CEO of NCF Investment Inc, which serves to increase the Global Understanding and Trade by Embracing and Building on Individual Cultural Capacity and Diversity, Community Development and Business Projects in the US and Internationally.

Chief Ms. Temitope Ajayi has extensive experience in community service, both in Nigeria and United States, some of which are the following:

Consultant and also an accountant by profession, and was actively involved in Government and several Community Affairs in Nigeria. She was the personal assistant to the Deputy Governor of Lagos State Government, Her Excellence Alhaja Sinatu Aderoju Ojukutu (1991-93).

Played an active role in Better Life for Rural Women sponsored by Nigerian's First Lady Mariam Babangida and was a delegate for the International Women's Conference held in Morocco and London, she Established a Fashion/Technical school for under privileged students in Ibadan, Nigeria in 1980-1985.

In his remarks, Mayor Jerry Brown of Oakland, California states, "Celebrated on February 15th, the first annual Nigerian Valentine Dinner Party celebrates the love, hope, and support that we have for our young adults. By organizing the event, Chief Ms. Temitope Ajayi inspired the community around her to strive for greater success and promote cultural pride. Her leadership and compassion strengthen all of us, and the manner in which she lives her life sets an important example. Chief Ms. Temitope Ajayi, we are forever grateful for your commitment, leadership and vision”.

When the First Lady of Nigeria passed along with the 117 people in a plane crash in Nigeria in 2005, Chief Ms. Temitope Ajayi held a memorial service in Oakland, California, which was attended by the Nigerian Consulate General of New York, Dr. F.R. Aderele.

When it comes to assisting her people, Chief Ms. Temitope Ajayi continues to use her political influence to assist her people, and bring government officials to continue to discuss issues that deeply concern the Nigerians both in the U S, and in Nigeria. She coordinated and co-host the "The State of the Diaspora," a town hall meeting, which discussed education, fighting HIV/AIDS, INS/Immigration issues, and business partnerships Oakland, California. The keynote speaker for this function included Congresswoman Barbara Lee, Dr. Amos C. Brown (who spoke on the "State of Black American in the Bay Area"), and Immigration lawyer Mr. Samuel U. Ogbu.

In her remarks, Congresswoman Barbara Lee states, "the forum that you provided gave me the opportunity to discuss how to go about reversing the many negative trends that are currently prevailing as a part of a broader anti-immigrant effort. It is important that we welcome refugees and immigrants all while advocating for the rights of the American worker."

In building business enterprises, she began a partnership with Wells Fargo Bank to ensure that the financial literacy along with home ownership and business ventures are achievable for Africans. And, as it relates to new credit, and credit repair, Citigroup has enjoined as a partner to improving the America dreams of many Africans, and also Export and Import Bank of USA- Ex-Im Bank.

In the most anticipated Nigeria Independence Day parade in New York City (October 2005), Chief Ms. Temitope Ajayi was nominated a Marshall, alongside with the Permanent Representative to the Mission of Nigeria to the United Nations Ambassador Aminu Wali, Consular. General of the Nigeria, Dr. F.R. Aderele, the Deputy Permanent Ambassador to the Mission of Nigeria to the UN, Ambassador Adekanye, some State Governors from Nigeria and many other dignitaries.

Chief Ms. Temitope Ajayi was nominated to serve as the Co-Chair of an International Conference of Infrastructure Development and Environment ICIDEN-ABUJA 2006 www.iseg.giees.uncc.edu/abuja2006.

Chief Ms. Temitope Ajayi was the former President of the ANAC House of Delegate, for the All Nigerian American Congress. www.anacweb.org. In this organization, Chief Temitope Ajayi hopes to leverage her existing political partnerships, and mobilize all existing Nigerian organizations to invest in rebuilding our Nigerian communities both in the US and in Nigeria.

In recent months, Chief Ms. Temitope Ajayi, mobilized a Nigerian leadership coalition to challenge the false imagery of Nigerians in America as criminals, a documentary forecasted on CNN titled; How To Rub A Bank? After several dialogues, CNN representative apologized to the Nigeria Community for such false imagery of Nigerians in the United States. She received a Congressional award from Congresswoman Barbara Lee for her role.

She led the Nigerians to Ex-Im Bank seminars where the representatives of the bank spoke and encouraged Nigerians in the Diaspora, who plan on exporting American goods to Nigeria to begin taking advantages of their services.

During the 2006 G8 United Nations World Summit, Chief Ms. Temitope Ajayi, was invited by the Permanent Mission of Nigeria to the United Nations to serve as an advisor on Global and Pan-African Women issues.

Chief Ms. Temitope Ajayi wants to be known as leader that wants the best for all the Nigerian men and women in United States of America.