Dele Olojede (born 1961 in Modakeke, Nigeria) is a Nigerian Pulitzer Prize-winning journalist and former foreign editor for Newsday. Olojede was the first African-born winner of the Pulitzer Prize. 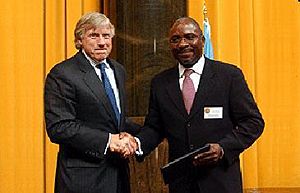 Olojede was born the eleventh of 28 children. In 1982, he began his journalism career at the National Concord in Lagos, a newspaper owned by aspiring political figure Moshood Abiola. Olojede left the paper in 1984 after he became concerned that Abiola was using the paper to advance his personal political ambitions.

Olojede enrolled at the University of Lagos where he studied journalism. As a student he was particularly influenced by Nigerian literary luminaries like Chinua Achebe, Wole Soyinka and Cyprian Ekwensi and other African writers like Ngugi wa Thiong'o.

Olojede became one of the founding staff writers of a Nigerian news magazine called Newswatch in 1984. The magazine was edited by Dele Giwa, a well-known Nigerian journalist who was killed by a mail bomb on October 19 1986. Olojede publicly accused Nigeria's military leader Ibrahim Babangida of being responsible for the murder. In 2001, eight years after leaving power, Babangida refused to testify before a human rights court about the murder.

A 1986 investigative report on the imprisonment of the popular Nigerian musician Fela Kuti led to Kuti's release and the dismissal of the judge who imprisoned him. In 1987, Olojede's efforts earned him a US$26,000 Ford Foundation Scholars grant which Olojede used to get a master's degree at Columbia University. At Columbia he won the Henry N. Taylor Award for outstanding foreign student. Olojede eventually became a U.S.-Nigeria dual citizen.

On June 6 1988, Olojede joined Newsday, the Long Island-based newspaper, as a summer intern. He eventually became a special writer covering minority affairs. In 1992 he began work on loan to the paper's foreign desk, making several trips to South Africa. He became the paper's United Nations bureau chief and then an Africa correspondent, based in Johannesburg, South Africa.

Olojede later worked as a correspondent in China, then returned to Long Island where he became foreign editor of Newsday. In 2003, Olojede took an opportunity to return to Africa as a correspondent to write about the 1994 Rwandan Genocide, ten years later.<ref name=Prince/>

In April 1994, when the genocide broke out in Rwanda, Olojede was covering the South African general elections, the first free elections at the end of apartheid. Olojede has said that while the South Africa story was important, he has often wondered if he could have helped the situation in Rwanda if he had gone there instead.

Olojede's 2004 series on the aftermath of the Rwandan Genocide was well received. One story that drew particular attention was "Genocide's Child" about a mother who was raising a son conceived during a gang rape during the war.

In 2005, Olojede won the Pulitzer Prize for International Reporting{ See 2005 http://en.wikipedia.org/wiki/Pulitzer_Prize_for_International_Reporting} for his "fresh, haunting look at Rwanda a decade after rape and genocidal slaughter had ravaged the Tutsi tribe." The series was viewed as a major accomplishment for black journalists. Olojede was assisted by African American photographer J. Conrad Williams, and much of the series was edited by Lonnie Isabel, another African American journalist who was the assistant managing editor for national and foreign coverage.

By the time he won the Pulitzer, Olojede had already left Newsday. The Tribune Company had purchased Newsday from its previous owners in 2000, and by 2004 were trying to trim costs. At the end of 2004, Newsday offered a round of buyouts. On December 10 2004, Olojede took the buyout and moved to Johannesburg, where he was living when he learned he had won the Pulitzer.<ref name=Prince/>

As of 2006, Olojede was living in Johannesburg with his wife and two daughters. In November 2006, the East African Standard reported that Olojede was hoping to launch a daily newspaper that would be distributed across the entire African continent.

Timbuktu Media and Next

Dele Olojede is the Publisher & CEO of Timbuktu Media, a media company that produces names like 234Next, Elan and other popular newspapers and internet media websites providing extraordinary news and entertainment coverage in Nigeria and all over Africa.

In addition to the Pulitzer Prize, Olojede has won several journalism awards.