AFRICANS YOU SHOULD KNOW: 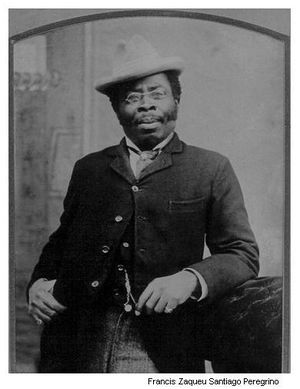 Peregrino, Francis Zaccheus Santiago (c.1851–1919), [FZS Peregrino], pan-Africanist and newspaper editor in South Africa, was born in Accra, Gold Coast, the son of Zaqueu Francisco. Nothing is known of his mother. His father was the son of a Hausa woman who had been captured in West Africa and taken to Brazil as a slave and who returned to Accra with her children in 1836, becoming part of the Afro-Brazilian community there.

After Peregrino completed elementary school in Accra he was sent to Sierra Leone, then England, to study. He remained in England, working in the iron industry and as a clerk, and on 11 October 1876 he married Ellen Sophia Williams, an American, in Staffordshire. Within two years the couple had two children.

Probably because of the economic recession Peregrino moved from the English midlands to Pittsburgh, Pennsylvania, in 1887, and his family joined him there the following year. By 1896 he was publishing a weekly newspaper, the Buffalo Spectator, for ‘coloured people’, in Buffalo, New York.

Three years later, he was writing and publishing a similar paper, the Fortnightly Spectator, in Albany, the capital of New York state. Its masthead proclaimed that it was ‘liberal in all things’, and in it Peregrino sought to link African-Americans to their African heritage.

In 1899 he went to London, where he attended the first pan-African conference in 1900. He then travelled on to Cape Town—it seems in part in a vain search for his son Francis Joseph, who had gone to South Africa and there compiled A Short History of the Native Tribes of South Africa (1900). Cape Town was to remain Peregrino’s base for the rest of his life, and his wife and two of his children soon joined him there from the United States.

Only two weeks after his arrival in Cape Town, Peregrino began publishing the South African Spectator, ‘published exclusively in the interests of the Colored People’, which for over a decade was what he was best known for. In it he promoted ideas of pan-Africanism and provided news of the activities of black people around the world. He claimed to be the representative of the Pan-African Association set up by the pan-African conference in London. He hoped to be made American consul in Cape Town, but that came to nothing.

Among his numerous business activities there he represented the Cunard line, booking passages for African students to America, and for a time he ran a real estate agency.

In 1903 he was a member of a delegation to meet the visiting colonial secretary, Joseph Chamberlain. He expected that with all South Africa under British rule the region would enter a new period of prosperity. He remained a strong Anglophile and continued to look to Britain as the potential saviour of the black people in South Africa.

Peregrino soon became a prominent Capetonian, identifying primarily with the mixed-race coloured people of the city. He was active in moves to create a political movement, and helped in the founding of the leading coloured political organization, the African Political Organization (APO), but he soon fell out with its leaders and became a strong critic of the party.

His conservatism offended many coloureds and the African Political Organization mocked his acceptance of racial segregation if facilities were equal. After being mugged by a group of whites, he set up the Coloured People’s Vigilance Society, of which he remained secretary until his death.

Active in petitioning government and serving on delegations on a variety of issues relating to coloureds, he failed to bring coloured and black Africans together, but developed close ties with some Africans.

In 1904 he founded the short-lived South African Native Press Association with Sol Plaatje, a leading African intellectual, and he put much effort into developing ties with a number of African chiefs in the interior, including Chief Silas Molema of the BaRolong, though with little result. Always in financial difficulties—he became bankrupt in 1904—he began to pass information about black politics to the government.

These early writings of Pixley ka Is aka Seme and Solomon T. Plaatje, which established the early constructs of the New African Movement, were in a sense realized within a major historic event of 1900 of which they were not immediately historically aware: the founding of the political organization of PAN-AFRICANISM by the Trinidadian Sylvester Williams in London. Williams immediately in the same year of 1900 visited South Africa on launching the organization. The only member of the New African Movement who was immediately aware of the connection was F. Z. S. Peregrino, a Ghanian who resided in South Africa for decades and died there. He founded the newspaper the South African Spectator. In it, he sought to connect together PAN-AFRICANISM, AFRICAN NATIONALISM and NEW AFRICANISM. Having lived in United States, in the Rochester area, for a decade before coming to South Africa, F. Z. S. Peregrino was clear about the similarity in the nature of racism confrontating the African people in South Africa and the African Americans. Peregrino made the South African Spectator the political and intellectual forum of this connection across the Atlantic. [1]

By 1910 Peregrino was suffering from serious health problems, but in that year he published in Cape Town Life among the Natives and Coloured Miners in the Transvaal, and during the First World War he published a recruitment pamphlet for the South African Native Labour Corps.

When he died of a heart attack in Cape Town on 19 November 1919 his only asset was a mining concession given to him by King Lewanika of Barotseland in 1906. Only one of his children, Thomas John, remained in Cape Town after his death; his widow and other children settled either in England or in the United States. His extended family who remain in Ghana and Nigeria today are known as the Peregrino-Brimah's. A Nigerian Family, the Brimah's of Fulani heritage, originally from Ilorin migrated to Ghana, were crowned and married the Peregrino's (Fatima Peregrino) to become a large dynasty in Ghana. The chief is Chief MBP Brimah, whose palace is in Accra.

A man of restless energy and sharp intelligence, whom Plaatje referred to as ‘a master mind’ (Plaatje to Silas Molema, 11 July 1920, Molema papers, University of the Witwatersrand), Peregrino was pompous, often dressed like a dandy, and was difficult to get on with.

Not all the copies of his newspaper have survived, but from those that have it is apparent that he was a leading advocate of pan-African ideas in the early twentieth century, and that he helped shape early coloured politics at the Cape.