Difference between revisions of "Jibu" 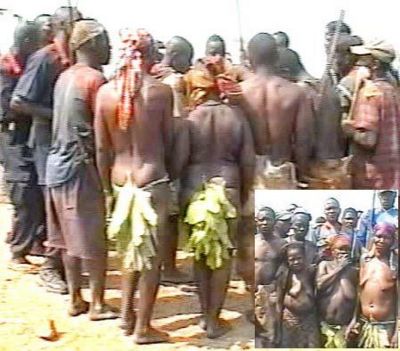 They live, literally, in the stone age. Poverty and diseases ravage their land, like locusts. A good number of them still dress in the manner of... the Biblical Adam and Eve in the Garden of Eden -- stark naked -- with fresh leaves for a little covering. You are welcome to the top of the Gerinjina mountain in Gashaka Local Government area of Taraba State.

It was like a story from Mars when a casual talk to the hearing of this reporter indicated that there was a community up the mountain that lived worse than those of the Koma people who were discovered in the mid-1980s by a group of National youth corps members in the then Gongola State, now split into Adamawa and Taraba states. While the Koma community resides in Adamawa State, the new Stone Age people are in Taraba State.

They are called, the Jibu people and they are descendants of the Kwarafa Kingdom who lived for centuries in nine communities scattered around on the mountains in Gashaka.

Historical accounts have it that the people lived together with their fellow brothers in the kingdom until about 1807 when Fulani Jihadists invaded the kingdom. They were said to have run to the mountain top where they now live and are completely cut off from other tribes, and by extension the whole world. Not even the activities of the colonial masters reached them, largely because of the difficult terrain of their new abode. The mountain top is characterised by rivers, deep gullies and huge rocks.

Just like any other group of human beings, the Jibu people have their ways of life. These include collective circumcision of boys born within the same age group, a ceremony performed with the use sharp objects.

It is considered a test of strength and character for their boys not to cry during the ceremony. The circumcised are kept on bamboo beds and covered with fresh leaves that are gathered and burnt after the wound has healed.

For a young Jibu man to get a wife, he must serve the family of his bride for five years. Nonetheless, the marriage is determined by the capacity of the woman to conceive. This is measured by a dried long firewood that is set on fire for at least three months, within which if the woman does not become pregnant, the simple communication is the gods do not want the marriage.

Pregnant women work on the farms to the day of their delivery.

They have a communal life and are ruled by the Waziri Garinjina, Tann Shidin Zunbi, who confirmed in an interview with the Nigerian Compass on Saturday that maternal and child mortality rates are high among them.

The Jibu people are neither Christians nor Muslims. Rather, they believe in their own gods and the ancestors. In an event of violation of their natural laws by any individual, animals are slaughtered to appease the land. It is also a similar story during every cropping season. The harvests are brought before the Waziri for sacrifice to the gods, after which their brand of liquor is prepared for everybody to drink in merriment. Incidentally too, the Jibu people believe that some gods are not friendly with women. Thus, throughout the period of ritual preparations, women remain indoors to avoid being exposed to the gods who could be harmful to them.

When our correspondent visited Gerinjina, their condition of living was worse than that of the much-talked about Koma people. There is no access road. They drink water with animals from the same rivers. In their scattered settlement system, there is no school around except for some missionaries who have a thatched space for that purpose but is yet to have any student. After a day's job on the farm, their women still have the task of grinding raw corn with heavy stones before food is ready for their male counterparts.

We went naked to gain their confidence – Cleric

Pastor Miracle Ishaya is the director of Mission Light House,Wukari, Taraba State, the first missionary that came in contact with the Jibu community. In this interview with STEPHEN OSU, he explained how his team had to go naked to get the people to listen to them, how he got to know about the community and their problems.

How true is it that you were the first to come in contact with the Jibu people?

It is true by the grace of God that we were the first missionaries to come across the people called Jibu. They are in a place called Galumjina. Their tribe is Jibu. These people were before now cut off from the rest of the world. In fact, nobody knew about them till we got there.

How did you know of their existence ?

A woman named Mrs.Joseph is a trader who lived in a place called Abba Dogo. After some time of staying in the village, she started seeing some strange faces in the place with leaves as their clothing and when she asked, the learnt that they live on top of the mountains. So, she came to inform us and when we got there, it was difficult to believe but it was true. And as they sighted us, some ran away, some became very violent and came out with there arrows but for the woman’s ability to speak Jibu language. We were accepted.

How did she understand the language?

Yes, it is not as if the people are completely different from every other tribe in the place, but they are a section of the Jibu that settled on top of the mountain. There are some other sections of the same tribe that are developed. So, through them, the woman was able to understand little things in the language except that they speak the old version of the language.

In what condition did you meet them?

They were totally naked, both women and men, covering some parts of their bodies with leaves. As a strategy for us to be accepted by them, we also had to strip off some of our clothes and told them that we were their tribes men, only that we were born in the town.

How did you get them accept clothes?

It was difficult at the beginning but they accepted at last to wear it on top of their leaves. The women value the leaves. They believe that if a leaf falls from their waist and a man crosses it, he will automatically be impotent. We also talked to them about the God who created everything, whom they also believe as a God for the children. So they at last accepted everything.

Now that you have got there, what is the main problem?

It was difficult to get them accept our ways of life as you can see. When we introduced palm oil, they said it was human blood. At first, we were sleeping under the trees. Their food was Burukutu. Diseases kill them in large numbers.

When, sometime last month, I visited the Koma hills in Jada Local Government area of Adamawa State on the instruction of my editor, I thought I had seen the worst in the living conditions of human beings that could ever be. I was wrong. Dead wrong.

Unknown to me, the encounter that would shock me to the very marrows, would be in my state of residence, Taraba.

On learning of another community of human beings who were probably worse than the Koma people and had just been in contact with the rest of the world, I quickly put a call through to my editor, again, informing him of the development.

“Are you ready with the story?,” he asked. My answer was in the negative. “Why then are you wasting time? Steve, go get the story. Go, go, go,” he ordered. Off I went same evening, on Wednesday,March 11, with just the ATM of my bank in my bag and a little cash that could serve for transport fare and feeding for the day, believing that there must be a bank in Serti Barewa, headquarters of Gashaka, with the Automatic Teller Machine (Or Any Time Money) facility.

But my assumption was, again, wide off the mark as the single bank (UBA) that had a branch in the town had no ATM.

With some part of the report ready while the most important was still missing, I instantly started regretting my decision to get myself involved in the assignment. Meanwhile, calls kept pouring in from my Editor who wanted to assess the level of completion. At a point, I contemplated putting off my phone but remembered it would be suicidal considering where I was. But thanks to one Mallam Hamidu Hassan who volunteered his UBA account number so that my office could effect a transfer, I became buoyant enough to hire two guides for the nine-hour mountain climbing.

Each of the mountains took at least one hour of the tortuous journey. My two guides, Mallam Balla and Mr. Titus Tanko Usman, took me to the top and to the house of the Waziri Garinjina, Tann Shidin Zunbi. Already tired, there was no option but to lay my head on any facility available for accommodation which my host magnanimously offered -- a bamboo mat in a structure, much of which was covered with grass. That prepared the grounds for the actual battle with mosquitoes and other insects that came out from the dusty ground.

After three days of the sojourn, both water and the little quantity of food got finished. Then came the time for dry fasting. That also took another one day and five hours, although locally brewed liquor was available for entertainment. The Jibu women on the other hand, were so entertaining with there grinding stones. Yes! The complete story arrived at last, but it was with tears.