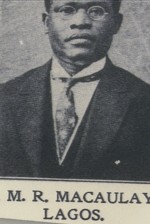 Magnus R.L., Macaulay was a Nigerian doctor who was prominent in the Lagos medical community during the early twentieth century.

Magnus was born in 1879 and attended various schools run by the evangelical societies. He went to C.M.S., St Peter's and the Wesleyan Boys High School. He joined the Lagos dispensary in 1897 and worked there until 1907. He left his job that year to further his medical education; he later earned a degree in medicine at the University of Edinburgh in 1919.