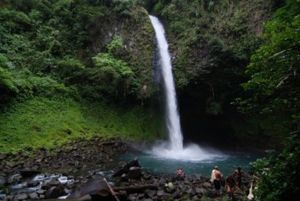 Ochun is said to be the youngest of the Orishas, she is the one whose prayers go directly to the ears of Olodumare.

Ochun (Oshun) is the Yoruba traditional river goddess or Orisha. She is in charge of romance, flirtation, seduction, love and marriage, fertility, money, gold, and is the archetype of joy and pleasure and hapiness.

She is a Venus-like personality and in Haitian Voodou is known as Erzulie. In Haiti she is honored on Tuesdays and Thursdays.

She is believed to bring all the good things of life, and is the goddess of sweet water and can be found where there is fresh water, at rivers, ponds and especially waterfalls, where offereings are left for her, and ceremonies are carried out.

future wives (Iyawo) go to the river for a special cleansing by Ochun the night before they are "crowned" in Ocha. Ochun is said to love dancing and making merry, but she also has a serious side. She is a great diviner and usually her children are very well endowed with spiritual and psychic abilities, which they demonstrate with the sacred seashells or "caracoles", the mouths of the Orishas, in divination. She is very sensual, but also very sensitive. Sometimes she can be easily offended.

In Haiti, Ochun is known as Erzile. She has almost all the same caracteristics as Ochun, with slightly different colors, it is yellow and gold, due to the association with money. Ochun is associated with Our Lady of the Caridad del Cobre. Cobre, which means copper in spanish, and the first money slaves saw in Cuba. She is still revered with the same energy. Her help is often sought in serious problems like marriage. Her function as an Orisha is very important, and Our Lady of the Caridad del Cobre is the patron Saint of Cuba.

Servitude to Ochun is similar in ritual to the Baptism practice of the monotheistic faiths, Judaism, Christianity and Islam, and may have originated from these and evolved into this Yoruba culture.